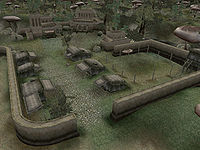 It is owned and run by the Duke's brother Orvas Dren, who is head of the Camonna Tong. It is inhabited by guards, both Dark Elf and Nord; an Imperial netch herder; and slaves, who are all either Khajiit or Argonian. Dren has quite the smuggling operation going, as evidenced by the many crates with moon sugar near the docks and elsewhere on the grounds.