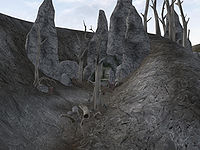 Assu is a small cave near Mount Kand and home to the Staff of Magnus.

Assu is guarded by a pair of mages and some daedra. The first one to be encountered, Fistelle, is capable of summoning clannfears to join the fight, and seems to have a penchant for lightning bolts. The second, Dreveni Hlaren, seems to prefer bonewalker minions, and carries the Staff of Magnus - the subject of a Mages Guild quest. Both mages are likely to be accompanied by daedra during the fight as well.

There are some high-level treasure chests that require levitation, and there is another chest in the water near Fistelle. Next to Dreveni are some potions on table along with Journeyman Retort, Alembic scrolls of summon Daedroth, Skeleton and Frost Atronach. There's also locked chest and urn containing more scrolls. 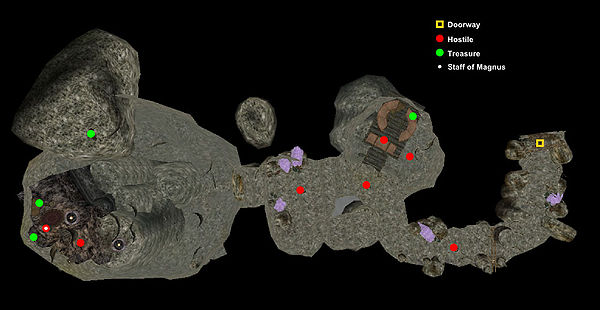