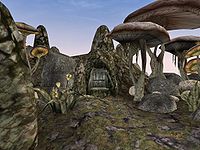 Ashirbadon is a small cave on the first island east of Bal Fell.

The cave is the location of a powerful mage, Vindamea Drethan, who holds the Warlock's Ring.

Once inside, the small path leads to an open cavern. While it appears to be a dead end, looking up reveals two offshoots to the cavern, both requiring levitation to reach. One offshoot is just a small inset where a dremora waits beside an ancient chest. Inside the chest is a key, which opens a locked door, and a levitation potion, along with other loot. The other offshoot leads to the cave where Vindamea is located.

There are four opponents on the way to Vindamea: three atronachs and a dremora. 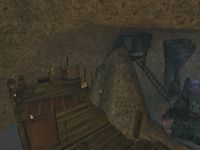 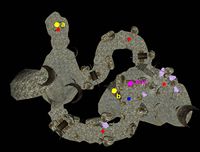