Whiterun is one of the nine-major cities in the province of Skyrim,[1][2] serving as the capital of Whiterun Hold and its vast open tundra. It is found in the heart of Skyrim, and because of this, it is the center of trade across the province.[3] It has been described as the "Imperial City of Skyrim"[4] and its large palace have been compared to Cyrodilic castles.[5] But it has a rich and important history that dates back to the Five Hundred Companions and the mythical forge known as the Skyforge.[6] In the Dragon Language, the city is known as Ahrolsedovah, which means Hill-of-Dragon.[7]

Whiterun is situated between the White River Gorge and the grassy tundra of Whiterun Hold, an open expanse that reaches as far as the eye can see, from the city to the edge of the hold. It is ideal hunting ground for the local hunters and pasture for the farmers. East of the city is the White River, as well as the crossroad that goes in four directions. The north and east road goes up the White River and through the mountain passes until they reach Skyrim's cold fringe. The south path goes up the hills into forested country and eventually the borders of Skyrim. Finally, the west path runs along Whiterun's southern face and a creek where the city's sewers empty in. Along the way are farmsteads and fork that goes either directly into the city, or further into the plains. Whiterun is well-fortified, the road into the city is a fortified hill with three layers of gate and the rest of the city is surrounded by a thick stone wall laden with small watchtowers.[8] Whiterun is neighbored by several settlements, including Black Moor to the west, Laintar Dale to the northeast, Nimalten City to the southeast, and Riverwood to the south.[1]

The city is separated into three districts, based on their elevation. The Plains District is Whiterun's center of commerce, riddled with open-aired marketplaces and firmly built cottages that also work as shops for business. At the center of town square is merchant stalls, which all surround the well. The back street behind the homes and toward the wall has small homes and even an entrance to the city barracks. The Winds District is the city's residential area, which divides itself from the lower Plains with another stone wall, at the top of a stone stairway. It is the home of the clan halls of both the Battle-Born and the Gray-Mane families, who have lived in Whiterun for many years. At the center of the district is the sacred tree of Kynareth, the Gildergreen and a small park that circle around it. The historical mead hall, Jorrvaskr is on the east side of the park, where it stands over the plaza proudly. The highest tier in Whiterun is the Clouds District, where not many people get to often. The only thing here is the Jarl's seat of power, Dragonsreach, which stands mighty above everything across the hold. It looms over the city from atop a long stairway.[8]

Whiterun's founding dates back to the late Merethic Era, during the years of Ysgramor and his Five Hundred Companions. Since they landed on Mereth, the Atmorans traveled across their newfound land, to pave their destiny. The Circle of Captains took their crews and explored each corner of the land. The first to disembark Ysgramor's grand fleet was Jeek of the River and his companions of the Jorrvaskr. They moved south into the modern-day tundra in central Skyrim where the crew member, Jonder the Tiny discovered a mysterious monument with a bird figurehead lit by fire. With no elven settlement in sight, the Jorrvaskr descended from the mountains, coming to the conclusion that this monument was older than the elves, driving magic older than Nirn. The crew of Jorrvaskr settled next to the Skyforge and turned their old ship into a mead hall. The newly-founded settlement, built from exported Atmoran wood, earned its name because it circles the running of the White River.[6] Like many other Nordic mead halls, a thriving community was built around Jorrvaskr and it eventually became the modern-day city and Jarldom.[9] The ancient Nordic families, the Battle-Born and Gray-Mane clans date their ancestry to this point in time.[10] In the settlement's earliest years, the Gildergreen was planted in what later became Whiterun's Wind District. It garnered the attention of pilgrims of Kynareth, who eventually built the temple that watches over the tree to this day.[11]

With the death of High King Borgas in 1E 369, Skyrim had fallen into a conflict known as the War of Succession. The Jarls of the province fought each other for ultimate supremacy, resulting in the spiral decline of the First Empire of the Nords and loss of its territories. All the while, the Dragon, Numinex wreaked havoc across the province, taking advantage of the battles and the mistrust between the Jarls. However, it took one Jarl, Olaf One-Eye of Whiterun to defeat the Dragon. The story regarding Olaf's victory is dubious and was doubted at the time, prominently by the bard, Svaknir. Regardless, the people of Whiterun were impressed by Jarl Olaf's victory and they built a large palace known as Dragonsreach, where Numinex was imprisoned until his death. Olaf's reputation across Skyrim made him the High King of Skyrim, ending the war in 1E 420. The Pact of Chieftains was created afterward, where a Moot was only conducted when a King dies without heirs.[12][13] However, when Olaf One-Eye died without heirs, the Moot constructed the Crown of Verity, which would properly determine a new heir.[14] 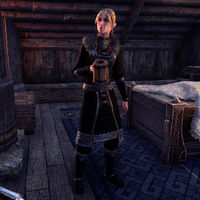 Many years later in 2E 431, High King Logrolf was assassinated. By right of heritage, Jarl Freydis of Windhelm was named the High Queen of Skyrim, and the Crown of Verity had chosen her for the role. However, Jarl Svartr of Solitude claimed that she was an illegitimate heir and that a Moot was needed to determine a proper heir. In the end, the Moot chose Jarl Svartr as the High King, thus causing a schism in Skyrim. The east followed High Queen Freydis while the west followed High King Svartr. This schism created two distinct kingdoms based on east and west. Whiterun and its territories were absorbed into the West Kingdom of Skyrim.[14][15]

In 2E 577, the city of Whiterun underwent a state of panic and hysteria when it was harassed by crazed outsiders and howling wolves in the night, which preceded several disappearances. The situation became worse when a Battle-Born clansmen was found naked, covered in blood, and surrounded by dead livestock at the Gray-Mane's estate grounds. A feud ensued and almost brought about accusations of lycanthropy, and even an execution, that was until an unknown figure came and resolved the situation. Not long afterward, the Jarl of Whiterun and his court alchemist vanished, leading some people to suspect that they co-conspired against the families. The newly-named Jarl, Morryn then named the court alchemist, Arkasis, an enemy of the highest regard. It is theorized by the "Chronicler-at-Large," Adandora, that the mysterious person that solved the case was the real-world Investigator Vale and that the story was reworked into the adventure novel subtitled, the Hounds of Black Moor.[16]

Whiterun in the Third Era[edit]

During the Imperial Simulacrum in the late Third Era, the city-state of Whiterun was an active settlement. It was ruled by King Asgis and it had a rivalry with Dawnstar and Falkreath.[17] By the waning years of the Third Era, in 3E 432, Whiterun was ruled by Witch-Queen Jsashe, a self-proclaimed priestess of Lorkhan with vast control over the county. However, the city was greatly suffering during this time, along with its neighbor, Hrothgar. Ranging from dynastic feuds, bandit raids from the Hörme, and a brutal winter among other things. The Witch-Queen's magic did not bring prosperity to the County of Whiterun.[4]

Whiterun during the Skyrim Civil War[edit] 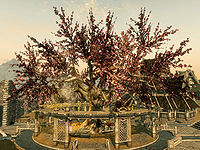 During the Skyrim Civil War in 4E 201, Whiterun was ruled by Jarl Balgruuf the Greater, who was the only Jarl to be neutral in the conflict. However, Whiterun played a much more significant role in the concurrent Dragon Crisis. After escaping the destruction of Helgen, the Last Dragonborn arrived in Whiterun and appeared before the Jarl and his court, to inform them of these events and that Riverwood was in need of protection. The Jarl sent a battalion of his guardsmen to protect the town[18] and later enlisted the Dragonborn for later endeavors related to the Dragons. After acquiring the Dragonstone,[19] the Last Dragonborn and the Jarl's Guard were sent to the Western Watchtower to fight a Dragon that had appeared from the mountains. The Last Dragonborn was able to defeat Mirmulnir and learn that they were indeed Dragonborn.[20]

Ever since, the Dragonborn had ventured across Skyrim, meeting both the Greybeards of High Hrothgar and the long-exiled Blades. It was revealed that Dragons were returning because the World-Eater, Alduin had returned, enacting the prophecy that called for the end of the world. After a dynamic battle at the summit of the Throat of the World, Alduin fled to the eastern mountains, to the ancient temple of Skuldafn, where he would devour the wandering souls of Sovngarde. But in order to gain access to Skuldafn, the Dragonborn needed to capture one of Alduin's soldiers, and by using the Dragonsreach of Whiterun. The Dragonborn confronted the Jarl of Whiterun to enact his plan. Details of this encounter are clouded. It is believed that because of the ever-present civil war, the Jarl agreed to do so when the civil war ended in a temporary truce, but it is unknown whether that was the case.[nb 1] Regardless, the Dragonborn trapped the Dragon Odahviing in Dragonsreach, and used his flight to infiltrate Skuldafn and defeat Alduin.[21] 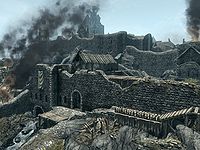 The Battle for Whiterun

For the first time in many years, contemporary with the Civil War, the Gildergreen was dying after being struck by lightning, disappointing the regular pilgrims that come to Whiterun and praise the tree. The priestess, Danica Pure-Spring tended to the Gildergreen but needed the essence of its parent tree, the Eldergleam to restore it. Danica enlisted the help of a wandering traveler to sample the tree. She sends the warrior to acquire the Nettlebane, an accursed dagger that can cut ancient flora. Returning with the dagger, the traveler was confronted by a pilgrim of Kynareth, who told them that instead of fixing the Gildergreen, they could plant a sapling. It is unknown which choice the traveler went with, but regardless, the Gildergreen was restored, fixing itself as time passed.[22]

The other holds of Skyrim had taken sides in the Civil War, however, Whiterun remained the only neutral party in the conflict, much to the dismay of both factions. The Imperial Legion had placed great pressure onto Jarl Balgruuf to join them on their side,[23] all the while, it was acknowledged on both sides that the Stormcloaks were planning to attack Whiterun should the Jarl not comply.[24] After a skirmish in the ruins of Korvanjund that lead to the discovery of the Jagged Crown, the Battle of Whiterun ensued between the defending Imperial Legion and the invading Stormcloaks. The city was besieged and razed down, leaving the Gildergreen Square in shambles and homes in the Plains District in ruin. The battle was strongest at the city gates and barricades, but whether it moved further into the city is unclear. The outcome of the battle is unknown.[25]