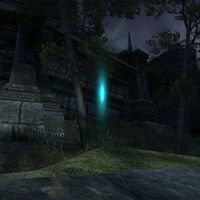 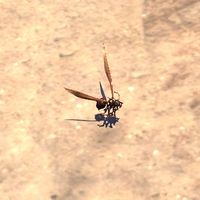 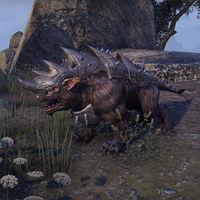 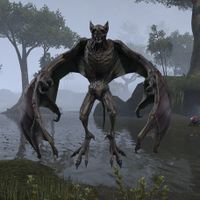 A mysterious lycanthrope with no reputable sightings and possibly created by folklore or myth. 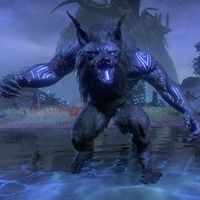 The Werewolf Behemoth was a form of lycanthrope discovered circa 2E 582 by Archivist Ernarde of the Silver Dawn at the behest of Vykosa the Ascendant. During his efforts, to strengthen the Moon Hunter Pack, he found a way to alter a werewolf's transformation to turn them into hulking monsters of considerable strength and size. This allowed his test subjects to become unstoppable warriors should they survive the experiments.[7] 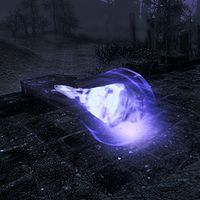 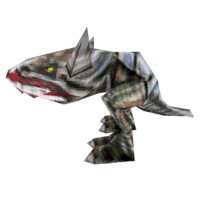 Will-o-the-Wisps are luminous beings seemingly composed of gas. They are immune to normal damage and poison, and have a variety of extremely dangerous magic. They are also very fast and have the ability to become nearly invisible. They're found in swampy areas of Tamriel. Can only be harmed by silver, daedric, or enchanted weapons.

A Harpy-like, female-form Daedra with bat-like wings. They operate as messengers of Azura. Winged twilights are resistant to fire, frost, poison, and shock and can reflect spells. Ichor extracted from a winged twilight can be used to brew potions of levitation.[8] 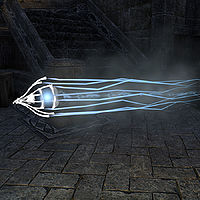 Many legends and theories exist which seek to explain the true nature of the Wispmother. Locals variously believe them to be remnants of the ancient Snow Elves ghosts (as supported by their tapered ears) or natives of Hjaalmarch. Master Sadren Sarethi proposed that they are a forgotten type of lich from the First Era. Lydette Viliane of the Synod proposed that they are elemental personifications of snow or mist.[9]

Worm Thralls are a type of zombie created by the Order of the Black Worm. Initially, "Worm Thrall" was simply the title applied to the order's lackeys.[10] The order has been known to turn people into Worm Thralls both as a punishment and as a method of preserving them for prolonged study. Notably, Vanus Galerion and several other past Arch-Mages of the Mages Guild were raised as Worm Thralls by Mannimarco. 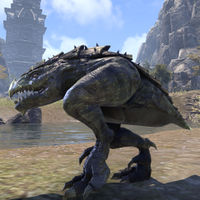 Wraith-of-Crows (or Wraiths of Crows)(or Wraith-Scythes) are otherworldly creatures composed of several daedric crow-like entities which create a semi-humanoid skeletal figure, usually possesing a pair of large black wings.[11] They originate from the Evergloam and are employed in the use of Nocturnal, who can summon them by combining many crow daedra together. They fight using magical attacks and abilities involving their scythes and wings, and are shown to have the capability to speak. 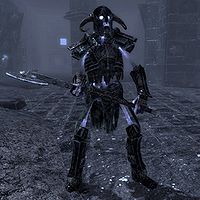 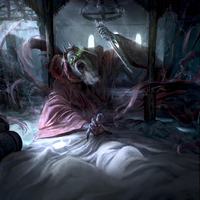