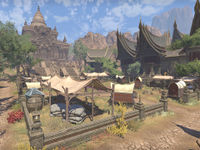 Riverhold (which derives from Rawla-Kei, or "River-Land" in Ta'agra)[1] is one of the eight-major cities in the province of Elsweyr,[2] found along the streams and waterfalls of the Larsius River in the region of Anequina. The town is well-known for their swarming, and overcrowded marketplaces,[3][4] more than other city-states of a similar stature. People across the northern countryside flock to the markets of Riverhold, to sell their goods and trades from their carriages.[5][6] The city-state is also known for being the gateway into Northern Elsweyr, from the province of Cyrodiil.[7] Riverhold was one of the original sixteen kingdoms, known for their hard-working farmers.[8]

Riverhold is found in northern Elsweyr, a part of the greater region of Anequina, which is known for their harsh badlands and its arid plains.[9][10] Riverhold is found along the northern provincial border, around a streaming river, hence the name. The region it inhabits is sparsely-habited, save for the Star Haven Adeptorium, or hunters of the Prowl, both of which in the southwest. Historically, the town has shifted control between the Kingdom of Anequina and the Imperials of the West Weald because of its purpose as a crossroad and trading post between these prominent nations, but historically and culturally, Riverhold has always been Khajiiti.[11] It is found on a three-way crossroad with irregular and short walls made in hues of saffron. Large domes of faded colors[12]:144 and traditional Anequine temples are found in the town's northern district, such as the Temple of the Purifying Moons. The seat of power in Riverhold is the K'har Zhab Town Hall.

As mentioned before, Riverhold is known for their swarming marketplaces, specifically the Market of Fresh Delights, which encompasses the center of the town. Interestingly, Riverhold is the closest city-state in the entire continent, to be the closest towards City Isle, in the province of Cyrodiil. This is not counting the county cities of Cyrodiil though.[13] Riverhold is neighbored by several settlements, including Kings Walk to the southeast, Tardorn Wood to the west, and the Imperial City to the north.[2][14]

Riverhold in the First Era[edit]

Since the late Merethic Era to the late First Era, Riverhold stood as one of the sixteen original kingdoms of ancient Elsweyr, being known for their hard-working farmers.[8] In the latter years of the Mythic Era, the feudal Hunt-Lords of Helkarn and Meirvale waged war against each other, eventually drafting their peasantry and causing one of Elsweyr's worst famines in their recorded history. After the hunt-lords were overthrown, several other peasant uprisings occur in their neighboring kingdoms, such as Riverhold. These events brought about the end of the hunter aristocracy that took control over Elsweyr.[15]

Like the other sixteen kingdoms, the Kingdom of Riverhold had fallen into disrepair with the arrival of the Thrassian Plague in 1E 2260. What remained of Riverhold was absorbed into the Kingdom of Anequina.[16][17] To this day, the House of Histories in Riverhold contained the Rithana-di-Renada, meaning the "Song of Kingdoms" in Ta'agra. It was a large mural containing sixteen pieces that represent the sixteen kingdoms. It represented Khajiiti unity and was built during the kingdom's era of peace. However, the pieces were scattered by the kingdoms. It was later rebuilt.[18]

By the late First Era, Riverhold was under the occupation of the Second Empire, along with the rest of Elsweyr. In fact, during the Four-Score War, amidst the Battle of Bodrum in 1E 2920, Queen Naghea of Riverhold led the left flank with Lord Storig of Farrun. But their forces were nigh obliterated and killed on the Pryai River, where their soldiers were killed in a wall of spears. It is unknown whether Queen Naghea perished in battle.[19]

In 2E 560, the Knahaten Flu had spread across southern Tamriel, heavily afflicting the province of Elsweyr. It began its journey in Elsweyr from the harbor-town of Senchal, where it arrived onto Alabaster and eventually the center of the province.[20] Using the mass strife in Elsweyr, the Empire of Cyrodiil invaded northern Elsweyr and annexed the cities of Riverhold and Orcrest, sometime around 2E 562. A retaliation effort was organized by the Khajiit to reclaim these cities, but it failed.[21] However, the Khajiit eventually reclaimed these cities, and unlike Orcrest, the town of Riverhold continued to thrive, while the entire province was still conflicting with the flu. But as time went on, they were slowly overwhelming the disease. Rathuni la-Dawnwhisker, a daughter of Azurah, developed a panacea that severely weakened the effects of the flu, using distilled sorghum-tea.[20]

However, Northern Elsweyr's problems were not over. In 2E 576, Euraxia Tharn established a coup d'etat that resulted in the downfall of Rimmen's monarchy and her subsequent takeover of Anequina's upper tier. Using her Nibenese mercenaries, the Euraxians, Queen Tharn had conquered Riverhold and everything in-between. Her reign over Anequina lasted for six years, and even when Elsweyr joined with the First Aldmeri Dominion, the Khajiit were unable to retake their homeland. Matters only worsened when it became public knowledge that she had aligned with a cult of necromancers led by Zumog Phoom[22] and her half-brother, Abnur Tharn had released Dragons from their imprisonment in the Halls of Colossus, to the rest of Elsweyr.[23] The Northern Elsweyr Defense Force, under the command of Lord Gharesh-ri and Agent Khamira, continued their fight against the "Usurper Queen" and eventually retook the town of Riverhold in 2E 582. Abnur Tharn and his associate joined forces with the two in their civil war for Elsweyr. The group used the K'har Zhab Hall in Riverhold as their base of operations.[24] 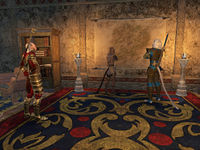 Euraxia Tharn later joined forces with the Dragons, albeit with the false notion that she was in full-command and that the Dragons were not using her. After a disastrous parlay in Rimmen Palace, the Usurper Queen orchestrated the retaking of Riverhold, with Zumog Phoom in-command. Abnur's associate was able to rally every citizen into the walls of Riverhold, as well as reinforce the defenses built by the Defense Force and the Soul-Shriven, Cadwell. Phoom used the undead in his attack, however, their corpses were cleansed with the blessed moon pillars across the Temple of the Purifying Moons. The Dragon, Bahlokdaan then appeared before the Defense Force and used the power of his Thu'um to destroy them. Abnur's associate shot down the Dragon and engaged him at the center of the marketplace. They managed to kill the Dragon and drive out Zumog Phoom's forces out of Riverhold. It was here, the Agent Khamira revealed herself as the last heir to the throne of Anequina.[25]

Contemporary with the civil war, Riverhold had its own share of problems. What started as an investigation for an elder's "lost daughter," turned into rooting out a drug-smuggling ring that could have ruined Riverhold. The Ruddy Fangs, notorious outlaws in Anequina were smuggling moldy Moon Sugar, poisonous to the average Khajiit, but concocted into tainted Skooma can induce horrible nightmares, awful pain, all ending with an agonizing death. The operation was destroyed by the Khajiiti investigator, Mizzik Thunderboots and a wandering traveler.[26] One of Rajhin's Shadow had displaced the sixteen pieces of the Rithana-di-Renada across Northern Elsweyr, as well as the Singing Crystal, the centerpiece that produced the song. All of these pieces were recovered and the Rithana-di-Renada was restored once again.[27][28]

During the Imperial Simulacrum in the late Third Era, the city-state of Riverhold was an active settlement. It was ruled by King Ab'dul and it had a rivalry with Dune and Orcrest.[29]

By the year 4E 40, Riverhold was "swarming with Imperial agents", resulting in a group of kidnappers taking Prince Attrebus to Sheeraln instead, a little market town a few miles west of the city.[12]:143