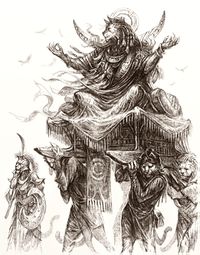 The Mane is a unique type of Khajiit. Khajiit tradition holds that only one Mane can be alive at one time and, more specifically, believe that there is actually only one Mane who is reborn again and again in different bodies. There has been no recorded incident of more than one Mane contending for power, although whether due to the truth in the Khajiit belief or whether the ruling Mane takes care of any potential rivals is unknown. Manes can only be born under a rare alignment of the moons Masser and Secunda when, according to legend, a third moon actually appears. In older days the Khajiit would shave off their manes in deference to the Mane, braiding them into locks which the Mane would incorporate into its own mane. The Mane is so weighted down by the hair that movement is difficult without aid and they often travel the countryside by means of a palanquin. As the population grew, however, this became impractical, although the Khajiit still remove their manes and the current Mane still wears the hair of its tribe and Warrior Guard which includes several hundred in number.[1]

Those born under the sign of the eclipse not chosen to be the Mane would instead be known as Forgotten Manes. Most of these Khajiit would be given to the Pride of Alkosh in Pridehome and be raised as warriors, ready to serve Elsweyr and Alkosh in times of great need.[2][3] In 2E582, a Forgotten Mane by the name of Ra'khajin left the temple in order to serve the dragon Laatvulon as his Dragon Priest, and would later return to raze his former home to the ground. [4]

This Lore-related article is a stub. You can help by expanding it.
Retrieved from "https://en.uesp.net/w/index.php?title=Lore:Mane&oldid=2193967"
Categories:
Hidden categories: