The UESPWiki – Your source for The Elder Scrolls since 1995
(Redirected from Lore:Magic Transportation)
Jump to: navigation, search 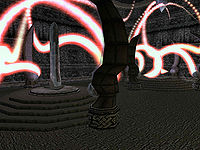 Inside a Propylon Chamber

During the Alliance War, the three alliances established individual Transitus Networks in Cyrodiil, a special form of portal magic. This temporary teleportation network allowed troops to instantaneously travel between keeps and outposts, although the networks seemingly had limited range and required constant maintenance by groups of mages when pushing deeper into enemy territory.[8] Transitus Networks are made up of small stone shrines, which glow with a cold blue flame when active. Although similar in appearance, they are unrelated to the ancient wayshrines, which can only be utilized for teleportation by exceptional individuals.[9]

The Dragon Cult constructed a special portal to Sovngarde at the temple of Skuldafn, which was used by Alduin. It is activated by a special staff entrusted to a Dragon Priest that guards the portal.[10]

The vampire Valerica of the Volkihar Clan, created a portal to the Soul Cairn using finely ground bone meal, purified void salts, and soul gem shards, which have to be placed in a silver-lined portal vessel, blood then needs to be added to this vessel to act as a reacting agent.[11]

The ancient Dunmer fortresses around Vvardenfell are connected by magical means, such that anyone carrying the correct Propylon Indices can jump instantly from one to the next around the loop. Only one index exists for each fortress, however, and most have been lost over time as the forts have been abandoned by their creators.[12]

The Khajiit have portals called moon gates, a well-known one is the Moon Gate of Anequina, which when attuned through a proper ritual can teleport one to Jode.[13]

Frostcrag Spire has teleportation pads to every Mages Guild hall in Cyrodiil, these were created by Arch-Mage Taris Rendil.

One way of gaining access to the Soul Cairn is using the Voidgate in the Battlespire, which required a void guide to be activated.[14]

A Shift Gate is known to exist in the Imperial City Prison, and was used by the Eternal Champion.[15]