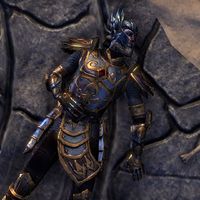 The Gray Host was a mighty and terrible army made up of vampires, werewolves, werebats, zombies, and faceless shadows, that was led by the Vampire King Styriche of Verkarth in the mid-First Era.[1][2] The motives of the blasphemous aggregation were unclear as no one bothered to inquire, though it was suspected to be more than mere slaughter.[2] Their reign of terror came to an end during the battle with the Bangkorai Garrison and Hestra's legions.

In 1E 1029, Empress Hestra arrived on her steed Fiery Ursula and led her legions to depose King Styriche, harrying him and his Gray Host into western Hammerfell.[3][4] The dreaded army of vampires, werewolves, and zombie Hussars were mounted on a great pack of skeletal wolves and fled west to the Fallen Wastes, burning and killing as they came.[5][3]

Eventually the Host reached the southern gate of the Bangkorai Pass, where they crashed upon the walls of the Garrison and slew hundreds, draining blood from them in great draughts casting down their pale, empty husks.[2] The vampires screamed their dark curses and slammed their claws and leathery wings into the gates of the fortress.[2] St. Pelin, a simple and humble beadle of the Chapel of Stendarr who tended to the soldiers of Garrison, ran to the fighting at the top of the great gate, where he found his friend Sergeant Clancie fighting off the hordes of the Host.[1] Clancie told him that they would soon burst through the gate, and knowing that only blood might hold them at bay, St. Pelin cast himself into the throng and offered his own blood to the creatures. As the foul creatures feasted upon his blood, he prayed a mighty prayer to Stendarr, saying "O Stendarr, God of Justice, fill me with an ocean of blood that I might beguile these daemons away from the gate but a few minutes more!"[2][1]

Stendarr recognized his great courage, and Pelin felt himself filled anew with an ocean of blood. The divine geyser of gore drew every vampire within sight into a great feeding mound before the gate, but as the vampires drank and drank, they could not drain him dry.[1][2] Struck by his sacrifice, the soldiers of the Garrison seized the moment and pushed a tottering battlement down upon the creatures gathered before the gate, dwindling their numbers until reinforcements could arrive.[2] With the vampires either slain or disoriented, the pursuing legions of Empress Hestra caught and killed the survivors, marking the end of the Gray Host.[1] The Empress was so impressed by the battle that she honored High Rock with admission into the First Empire.[3] Some skeletal wolves escaped the massacre of the Gray Host, and survived to haunt to wastes.[5]

During the Planemeld in 2E 582, Styriche and his companions Fangaril of Cyrodiil and Zayzahad the bat served as generals for Molag Bal, leading troops of Daedra and undead lycanthrope and vampiric members of the Gray Host at Dark Anchors.[6]