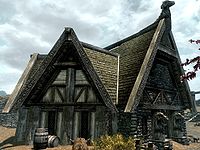 The Gray-Manes are an old and influential clan in Whiterun. House Gray-Mane is a large mansion in the city's Wind District. The clan was one of the first to live in Whiterun, making in likely that the family can trace its roots back to members of the Five Hundred Companions of Ysgramor. Before the Stormcloak Rebellion, the Gray-Manes were friends with their equally venerable neighbors, Clan Battle-Born. However, Clan Gray-Mane strongly supported the Stormcloaks, as well as Ulfric Stormcloak. Clan Battle-Born sided with the Empire. Each clan rallied the city's populace to their respective sides, though Whiterun officially remained neutral.[1]

Eorlund Gray-Mane was probably the clan's most renowned member, being the master smith who worked at the iconic Skyforge above the Jorrvaskr Mead Hall (though he was not a formal Companion).[2] Vignar Gray-Mane was supported by the Stormcloaks as a potential replacement jarl during the Stormcloak Rebellion, when the neutral Balgruuf the Greater fell out of favor with Ulfric Stormcloak. As associates of the Stormcloak, the clan was targeted by the Imperial Legion and the Thalmor.

The known family tree for the Gray-Manes circa 4E 201 is as follows: