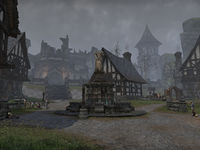 Camlorn (sometimes called Camlarn)[1] is one of the eight major kingdoms in the province of High Rock,[2][3] located in the western coastal highlands of Glenumbra. Camlorn is a city of self-proclaimed aristocrats and artisans, the center of a melting pot of Breton cultures and a booming trade between the Iliac Bay and the Eltheric Ocean. The Kingdom is known to take a neutral and pacifistic role when it comes to the dealings of their neighbors, Daggerfall and Wayrest.[4] 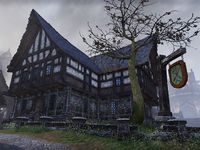 Camlorn is located in the Cambray Hills, a region known for its reported hauntings and a plethora of local legends.[4] It is built atop a plateau that overlooks the entire region, which slowly descends toward the coast and the lowlands to the city's key ports, the towns of Aldcroft and Eagle's Brook. The city is also surrounded by farmlands and other settlements including Westtry, Oloine, and Umbington. There are also several ruins near Camlorn, including Merovec's Folly to the northeast and the Cambray Pass that leads to the highlands of King's Guard. The city is heavily fortified and consists of a grand boulevard and many scattering side streets. The main street runs from the city gates to the royal palace; the Temple of Sethiete is situated near the gates. Another section of the city diverges from the main road in the west, which leads to the cathedral and eventually links back to the main street. Another notable location near Camlorn is Cavilstyr Rock, a wide promontory that overlooks the coast from above the bluffs.[5] During the late Third Era, Camlorn was neighbored by several additional settlements, including Ebon Wastes to the south and Moonguard to the east.[3]

Camlorn was founded in the early First Era when the Nordic Empire moved westward into what is now modern-day High Rock. It was predominantly a Nordic settlement, much like other High Rock cities at the time such as Daggerfall and Reich Gradkeep, but it became a city of Bretons through a long process of assimilation.[6] One of their oldest known monarchs was a figure named The Iron Son, who wielded a sword from Black-Iron that fell from the sky. His rule marked the beginning of a powerful dynasty.[7] The Kingdom of Camlorn itself was established roughly in 2E 301, the anniversary of which is commemorated by the Festival of Flowers. The festivities are full of bright tapestry, eccentric performers, and leaders of the vassal dukedoms and principalities of Camlorn, all of which ends with a fire-dance at Cavilstyr Rock. In a similar vein, the city has become renowned for its celebration of Flower Day on the 25th of First Seed, a holiday also observed throughout the rest of High Rock.[5][8]

Much like the other major kingdoms, Camlorn was present at the momentous Battle of Granden Tor[9] over two hundred years after its founding. In 2E 542, Durcorach the Black Drake and his Reachmen horde invaded High Rock from the east, ravaging the region of Bangkorai and attacking Wayrest in a failed siege. Eventually, the horde moved westward into Glenumbra, sacking Camlorn in its wake. The invasion ended at the gates of Daggerfall at the hands of Earl Emeric. The Kings of High Rock, including the King of Camlorn, thereafter formed an alliance that became the first Daggerfall Covenant.[10] Two decades later, High Rock was again engulfed in war, this time between the Kingdom of Rivenspire and the Kingdom of Wayrest, and other kingdoms including Camlorn came to Wayrest's defense. The war eventually led to the formation of the second, greater Daggerfall Covenant.[11] 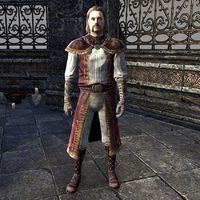 In 2E 582, the Kingdom of Camlorn was ruled by Duke Sebastien when another horde of Reachmen invaded Glenumbra. The Bloodthorn Cult had resurrected Faolchu, a werewolf, to help in their conquest of the region. Faolchu inflicted lycanthropy in a citizen of Camlorn, Jonathan Telwin, who promptly spread the disease throughout the city. As more people became affected, the gates were open for Faolchu's army of lycanthropes. A small percentage of citizens were rescued by the city guard led by Darien Gautier and kept safe in the local inn.[12] Duke Sebastien was among the afflicted and taken to the town of Aldcroft, where his condition was discovered.[13] General Gautier of the Lion Guard led the retaking of Camlorn, with the help of an agent of the Covenant. When the agent managed to sneak into the city,[14] they employed the help of Darien Gautier and the alchemist Alinon to gather supplies[15] and spread a cure for Camlorn's people.[16] Faolchu was ultimately defeated by the agent during their encounter in the royal palace.[17]

During the Imperial Simulacrum in the late Third Era, the city-state of Camlorn was an active settlement. It was ruled by King Edward and had a rivalry with Daggerfall.[18] At this time, the Eternal Champion traveled to Camlorn after acquiring the fifth piece of the Staff of Chaos from the Summerset Isles. They learned that the sixth piece was located in the Crypt of Hearts and their quest brought them to the Brotherhood of Seth in the city. Senior Brother Halfas Varn offered the dungeon's location if the champion retrieved a map from a disciple in the Mines of Khuras. Once they returned, the Eternal Champion made their way to the Crypt of Hearts.[19] Ever since their victory over Jagar Tharn, many Imperial loyalists have retraced the Eternal Champion's steps through their journey, including Camlorn.[20]

By the waning years of the Third Era, the Kingdom of Camlorn was in conflict with its neighbors, mainly Evermore and Northpoint, although this was characterized by minor skirmishes across the borderlands rather than full-scale warfare. By 3E 432, rumors of a united kingdom across Tamriel's west coast between Camlorn and its neighbor Daggerfall were spurred when Duke Senhyn's daughter, Lady Kelmena, married the Prince of Daggerfall, Camaron.[6]