This article is about the city. For the Third Era barony, see Bergama (barony). 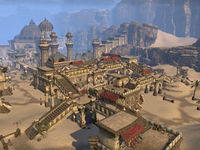 Bergama is a city in western Hammerfell, best known for being an enclave of the Alik'r Desert.[1]

In 2E 582, the magistrate of Bergama made a secret deal with the Worm Cult, delivering them several citizens, in exchange for the Cult sparing the city. Her actions were exposed by the Vestige.[2]

In the late Third Era, the city of Bergama was the capital of the Barony of Bergama.[3] Immediately following the Warp in the West, this region came under the dominion of Sentinel. According to a Blades' spy in the area at the time, there was an intense roar akin to a sandstorm and the populace seemed to just skip a day of their lives in an instant to learn the region was overrun by Sentinel troops and the Lord of Bergama's fortress was destroyed.[4]