The UESPWiki – Your source for The Elder Scrolls since 1995
< Daggerfall: Services / Quests: Merchants and Innkeepers
Jump to: navigation, search 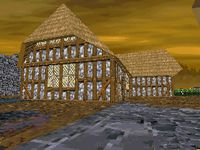 An ordinary tavern, the scene of the crime 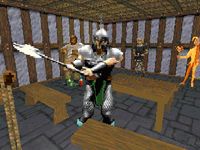 The courier may be a knight... 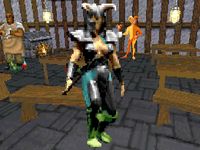 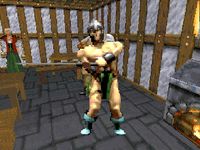 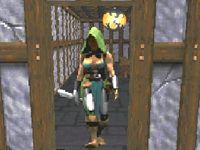 "My name is (employer's name). I have a mission that requires the utmost stealth and secrecy. The risk is minimal, and I will pay you (random gold) gold pieces. It will only take (time limit) of your time. I cannot tell you more unless you accept this mission."

"Hullo there, young (player's race). How'd you like to make (random gold) gold pieces just by performing what I'm told is called in mercenary circles "the old switcheroo"?"

"Go to (tavern) in (town). Lodged there is a courier bearing a letter, take it and leave this false one in its place. Do not disturb any of his belongings. If he finds out that the letter has been switched, all of my plans will be ruined. If you are caught don't bother trying to find me."

"I understand. I am glad that I did not reveal any details to you. Now you cannot betray me."

"Very well, but lack of ambition may well be your downfall, my young friend."

Go to the town your employer mentioned and find the tavern where the courier is staying. When you enter the tavern, the following message pops up:

This tavern looks like any other. However, for you it a place where stealth counts for more than strength. Now to find out where the courier has left that letter.

Search through the tavern and you will find a letter lying next to an item. Take the letter, then remove the fake letter from your inventory screen. You will receive the following message:

As the letter full of lies leaves your fingers, you know that your quest is half done.

If you pick up the item lying next to the letter, the courier will appear one in-game minute later and attack you, yelling when hit:

"Thief! I'll teach you to steal from an honest messenger!"

Whether or not you pilfered the courier's belongings, return to your employer.

If you successfully swapped the letters, your employer will say:

"Well done, (player's first name). Here is your reward. Never mention this affair to anyone. I will deny ever meeting you."

If you return empty-handed or have encountered the courier, your employer will say:

"It's you! All I asked was that you switch a simple letter, and you could not even do that! Leave my presence."

Any of the following, after you have rummaged through the courier's luggage:

(Recipient's name),
You are a most spiteful man. How could I ever
have thought that I loved you. Since you caught me
on the balcony in the arms of (suitor's name),
I can now reveal that we are indeed lovers. (He/She) is
able to give me everything that you cannot. You made
me feel unclean with your disgusting gifts of gold.
Do not ever darken my doorway again.

My dearest (recipient's name),
I know you are angry and hurt. I would do
anything to regain your love. What you saw on the
balcony was not of my desire. I had too much to drink
that night and (suitor's name) took advantage of
the moment to steal a kiss. (He/She) has been flogged and
is no longer in my service. Please forgive me.
I love only you.

Baron (baron's name),
Count (count's name) will have (his/her) forces
waiting to ambush you in the pass. Do not
fall for his trap.

Baron (baron's name),
Count (count's name) will be
waiting for you in the pass.
(His/Her) truce agreement is an
honorable and fair one.

(Recipient's name),
Your offer is ludicrous!
I can buy at half that price
from any other merchant in
(recipient's town), and I will.

(Recipient's name),
Your price is a fair one.
This letter is my bond of
payment for the goods. Present
it to my factor when you
deliver them.

Honorable (recipient's name),
I have decided to cast my
vote for you when the guild
ballots for treasurer. Of
course I expect to be treated
well in the near future.

Honorable (recipient's name),
I have decided to cast my
vote for (guild member's name) at the
next guild meeting. (He/She) has
shown (his/her) faithfulness to
the guild many times.

If you ask an NPC about your employer, they may say: