You learned from Prince Lhotun in a previous quest that King Lysandus took his court sorceress, Medora, as a lover. You enter Direnni Tower without any knowledge of where to find Medora. The passage ahead of me was blocked by some sort of large immovable stone so I took the door on my left when I entered. This room was large and was so tall I couldn't see the ceiling in the limited light. After killing the several skeletal warriors, vampires and other undead in the area I began to explore. Along, and in the rooms near the two staircases in the large room I found two wheels...both of which I easily turned. I almost fell for a most ingenious trap on one of the staircases when a large block quickly came out behind a tapestry, almost pushing off to a certain death. Luckily I was running at the time and was able to avoid it just in time.

Upon descending the stairs I saw that the two wheels I turned opened the trapdoor at the bottom. On furthur investigation I found out that it also removed the block from the starting passage to reveal a door. I followed the right hand wall of the dungeon's corridors for and discovered a curious red brick wall. I touched it and was transported to another location. After searching around this new area for a little while I discovered another red door suspended in a room and touched that one as well.

After killing an ancient vampire in this room I was teleported to I opened a door to find I was in a very large room. I once again followed the right hand wall, entering the first door I came to in this room. I soone arrived at some sort of maze constructed in tan-colored brick. I eradicted several wraiths inhabiting the maze and continued following the right hand wall. Eventually I came to a four way intersection with two downward sloping passages. I took the right hand one and followed it as far down as I could.

At the bottom of the sloping passage I once again continued to follow the right hand wall and came to a room with a door. Three walls in this room looked like they could be moved, but how? I exited the room and quickly came upon 4 levers pointing in each of the cardinal directions. After some experimentation I realized that they moved the walls in previous room. After randomly pulling some (and discovering an ancient vampire in the process) I discovered the correct combination to pull was only the ones facing east and west, were the Direnni banners were.

Following the now open passage I killed some nasty liches and soon came upon an comfortable looking room with a beautiful woman standing in one corner...Medora!

Always eager to help a damsel in distress (and a good looking one at that), you accept without hesitation.

Hmm...things aren't going to be as easy as they seem. Fortunately I was familiar with Sedungent, having completed the Concern for Nulfaga quest for Queen Aubk-i of Daggerfall. Still, Shedungent is a large place by any definition and it could take weeks to find the horn. With my large ship waiting in Isle's harbour I made quick time across the strait and on my long journey through the Wrothgarian Mountains to Shedungent. 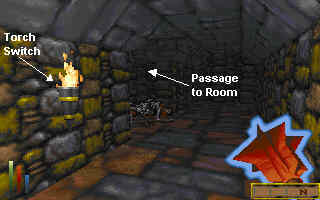 After finally making it to Nulfaga's home and finding it looking pretty much the same as last time I decided to pay a visit to Nulfaga. As I suspected she was still quite mad and didn't provide me with any information about the location of the horn. I searched for hours and hours on end without finding anything. I came upon a long upwards sloping passages that ended in an apparently solid wall. I considered this rather suspicous and conducted a more thorough search at the beginning of the passage. As soon as I touched a torch near the base of the passage it started to move and I heard a rumbling sound. Sure enough, the wall at the end of the passage had disappeared.

I took the left route at the top of the now cleared tunnel and found myself in a small room. On the bed was lying a large unicorn's horn...finally I had the object which would free Medora! I took it and examined it.

Once the horn was stowed safely in my pack I quickly exited Shedugent with a Recall spell and hurried back to the Isle of Balfiera and Medora. Having found Medora once it was easy to retrace my steps and find her again.

All-right...another magic item and the favour of a member of royalty. Surely both of them will come in handy in the future.


Go through the door immediately by the entrance into a huge room, and climb the stairs to the top. There's a crank above a fireplace - turn it. (If no fireplace, you're in the wrong room - go up the OTHER stairs.) Go through the now open trapdoor at the bottom of the huge room.

You are now in a maze (oh joy). Go straight until your left wall branches into a new corridor. Turn right, not left. Follow the wall on your left until you go downstairs. Go down until you get to a T marked by a Direnni banner. Go right (down). You are now by a series of columns with levers. Pull only the 2 levers that are facing Direnni banners.

Go south to a Direnni banner next to a door going west. Go through the door and follow the path through another door and up to Medora.


You now have to return to Shedungent in the Wrothgarian Mountains to find the unicorn horn. If you completed the Concern for Nulfaga quest you will know the command word to open the magically locked door which will make your search for the horn much quicker, or if you have access to a powerful open spell. Otherwise, get ready for another dungeon romp.

This is the fastest way to get the unicorn horn. Go to the banner and say shutup, take the tunnel out of that room. At the room on the right pull the middle lever. Go left up the stairs, then right. Keep on that path, take NO turns until you come to a 4-way intersection. turn right. Keep going forward through the twists. The path turns right and the walls change texture. At that intersection pull the torch. Turn right and take the stairs up. Turn right and go thru the door. There is a secret door on the south wall. In that room is a bed with the horn on the bed :)

The next quest is Dust of Restful Death, or you may return to the Quest Walkthrough Page.

If you have any problems, suggestions or comments on this page or website, please feel free to use the Contact Form to send a message to the WebMaster.
This document was last modified on: Saturday, 19 February 2011, at 09:55:05 and has been accessed 4768 times ( /dagger/hints/wt_med.shtml ).